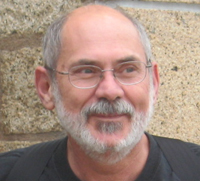 Following an engineering degree and a stint in the Air Force, I taught high school mathematics for three years in Henrico County, VA. Why the change of direction and why math? Nearly four decades later, a young woman student, who came to my office requesting a letter of recommendation, answered the latter question better than I could have. “Why do you want to teach math?” I asked, curious about what motivates today’s aspiring teacher and why she would chose a subject that is the bane of many. After a long pause, she responded somewhat hesitantly, “Well … math is sort of like …,” and her eyes lit up, “magic.”

Einstein thought so too and pondered, “How can it be that mathematics, after all a product of human thought independent of experience, is so appropriately adapted to the objects of reality?” That is, why does mathematics, an abstract language dreamt up in the human mind, so perfectly describe the orbits of the planets, the breaking of a wave, or the probability of finding an electron at a particular place in its orbital? It’s an amazing coincidence: thought aligning with reality. I teach mathematics because it really is magic, but that is getting way ahead of the story.

My 29th year was miserable. I was unmarried, on the downhill side of a broken relationship, under-employed, lonely, lost, and clueless as to why. Nothing was working out the way I’d envisioned my life. Worse, it seemed to be working out fine for everyone around me. It took several years and some good therapy to begin to sort out the major issues, but in retrospect the problem is pretty easy to describe. Like the Grinch’s heart, my worldview was at least three sizes too small.

I’d grown up in a provincial town in West Virginia, belonged to a religious denomination that bordered on the rigid, and adopted conservative parental values lock, stock, and barrel. But the value system that worked well when I was a teen was crushing my soul at nearly thirty.

The first tentative steps out of the darkness came in 1978, eight years after earning my undergraduate degree, when I entered UVA to begin working on an MS in applied mathematics. The MS solved the under-employed part of the problem, and after two years of working for a great little aerospace firm, I returned to UVA for a PhD. And there I plunged headlong into a deep depression that lasted for two months. In hindsight, that depression was one of the greatest spontaneous gifts I have ever received, because it forced me to do what author, educator, and activist Parker Palmer calls “heart work”—confronting the discrepancy between who we are and who we wish to be. During that process, the narrow confines of my old value system were revealed to me. Depression was a way of sloughing off and grieving for the old skin that had to go to make way for a new one, a value system that was genuinely my own. Starting afresh required a bold step. I transferred to the University of Arizona, leaving behind the familiar and comfortable.

In Arizona, slowly but surely, my world began to grow. My dominant impression during those first weeks in Tucson was of the unusually pure quality of the light, so different from the diffuse light back East that rendered everything in subdued tones. In contrast, the Arizona sky shone deep blue, rock formations displayed an amazing spectrum of earth tones, sunsets glowed a brilliant orange, and cacti turned radiant in the late afternoons, their translucent spines aglow when backlit. Like a houseplant that had been too long kept in a windowless room, I thrived on that light. I’m a mountain boy of the Appalachians, and I still love their lush green.  But I came to love also the austere beauty of the desert Southwest, and the Arizona “mountain islands” from whose summits one’s eyes could encompass tens of thousands of square miles. I left few stones unturned when it came to exploring Arizona’s charms: its canyons, mountains, parks, old mining towns, pueblos, and Indian reservations.

I became a world traveler too.  At first, it was just across the border to Nogales, Sonora, to find a good chile relleno, and later to Guadalajara, Mexico’s second largest city. I spent the summer of 1984 in Germany at the alma mater of my advisor–the University of Stuttgart–and friendships established then with German colleagues persist to this day. Back in Tucson, I met my wife Suzanne, who was undergoing her own metamorphosis, a few steps ahead of me. She helped open my eyes to the travails of Latin Americans who live under the shadow of a very big neighbor El Norte, to the Sanctuary Movement, and to liberation theology.

I look back on those four years in Tucson wistfully. There I first gathered the courage to take some risks, to re-examine hand-me-down values, especially hand-me-down spirituality, to continue the “heart work” that would reveal my core, and to crawl tentatively out of my shell.  It was a time of immense personal growth. I’d like to think that I have been growing ever since. But in truth, like one’s body, one’s soul sometimes grows only in spurts.

It seems to me that, whatever our purpose on earth, a large part of that purpose involves growing: physically, intellectually, emotionally, and spiritually. What then are the stimuli of growth?

The second ingredient, education, is also key, whether formal or informal. Education creates the new synapses that will make possible a new and healthier way of being. Education is the closest thing we have to a genie in a bottle. It is the magic elixir that helps us transcend our limitations. It liberates the oppressed, whether they are oppressed by the “system” or, in my case, by a constrictive worldview. Education at its best makes us realize that we are not alone, but parts of an intricate and elaborate web of life. Education helps us see the trajectory of where we have been through the eyes of history and projects us into the future along the arc of evolution. All true education, regardless of discipline, ultimately points to the greatest truth of the oldest discipline—philosophy: the love of wisdom—as expressed in the most seminal three words of the Upanishads: That are Thou. What looks separate is not. The “other” is as sacred as you are, because ultimately, there is no other. Like the aspen grove, beneath outward appearances, we individual trees share the same roots.

Exploring the hidden connections that bind us to one another and to the anima mundi is the greatest joy of my life. Being able to explore those connections collectively, in a classroom of courageous students, is a privilege not to be taken for granted.

Is every day in the classroom scintillating, inspiring, or profound?  Do I connect at a deep level with every student. Of course not. Many days I feel like Sisyphus. Then again, there are days when I’ve received a note that made my heart soar, “Thank you for teaching me that science can have a heart,” or have read on a course evaluation:

“[This course] went outside the bounds of memorization and traditional learning; it entered the realm of intense thought and reflection. The ideas we covered forced me to expand my mind and examine what I know, who I am, and my place in the universe.”

At its best, a “university” is where one goes to study the universe and to seek one’s place in it.  I love being a part of such a university.  Where else does one get paid to explore, to grow, and to help others grow?

Dave Pruett will be retiring this summer (2012) after a checkerboard career that includes 25 years of teaching at various levels (16 at JMU) and nearly a decade of aerospace-related experience at NASA Langley Research Center.  Hard work, the support of family and colleagues, good students, time, and luck have earned him a number of awards over his late-bloomer career: the Robert T. Knapp Award of the American Society for Mechanical Engineers (ASME) International, the Provost’s Award for Excellence in Honors Teaching, JMU’s Distinguished Teacher and Madison Scholar Awards, and JMU’s first Mengebier Professorship. But upon reflection, his proudest accomplishment is the development of the Honors Course “From Black Elk to Black Holes: Tales of a Mysterious Universe,” which garnered a Science-Religion Course Award in 2000. Born of a personal struggle for integrity, “Black Elk to Black Holes” has touched many lives and was the initial inspiration for Reason & Wonder: A Copernican Revolution in Science and Spirit, Dave’s 12-year labor of love which will be published by Praeger in May 2012.